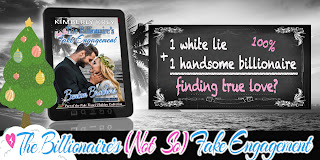 This is The Billionaire's (Not So) Fake Engagement.

Friends,
what to say about this 5-book series that I've poured my heart into...

I love the Benton Family!
I love their resilience, their loyalty, and their close family connection, which is what makes this finale a perfect fit!

Both Burke and Justine have longed for a close family connection. Both have experienced loss, heartache, and a sense of rejection. And both feel an absolute joy from the Benton family's embrace.

Their past struggles also make the romance between them so much sweeter! A sweetness that, thanks to Justine, Burke learns to slow down and savor.

You must read the excerpt below. It's so much fun!
I decided to put the first in the series free for a few days, so please pass it along to a friend who hasn't started the series yet.

All the details are below.
Thanks for the love and support, book friends!

Oh, and before I forget, this book also starts a fun fake fiancé series with a group of your favorite clean romance authors, to stay tuned for more. 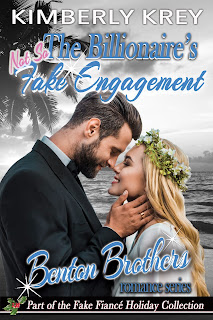 One little nod.
Just one simple nod under pressure and Burke found himself fake-engaged to a gorgeous country girl who needed a lift.

She cries about cats dying that aren't even hers.
She turns old furniture into beautiful pieces of art.
And she tells her aging grandpa that she's engaged so he'll stop hooking her up with odd guys who come through town.

The crazy thing is, Burke might actually be falling in love with her.

Excerpt from The Billionaire's (Not So) Fake Engagement:
“Remember the mean girl I told you about? The one who bugged me about not having a mom?”
“Yeah, she was a jerk at the grocery store too,” he said with a nod. A smile stretched over his lips before she could add to it. “Wait, is she gunning for it too?”
Justine nodded. “And guess what? If she wins this year, she’ll be the first girl to win Pie Princess three years in a row.”
Burke’s jaw went hard. “That’s not going to happen.”
“It’s not?”
“Not a chance. I’m telling you, this pie is something else. But…” His eyes went wide with worry. “You guys probably don’t have a store open all night, do you?”
She grinned. “The grocery store’s not even open now.”
Burke shot the dashboard a look. “It’s not even three yet.”
“Yeah, but it’s the festival. Everything shuts down for it. What ingredients do we need?”
He shook his head. “I’m still a little disturbed that everything shuts down for this.”
She laughed and gave his arm a slap.
“We need butter,” he said, “flour, salt, vinegar. Let’s see…sugar and cinnamon, of course. Lemon juice…”
“I’ve got all of that,” Justine said. “But what’s the vinegar for?”
He puffed his chest. “The crust.”
“Hmm. Is that a secret ingredient?”
Burke nodded.
“And are there apples in this apple pie of yours?”
His expression turned chagrined. “Yes. And they have to be good ones. Granny Smith. Is it too late to get our hands on those?”
Justine considered that. “No,” she realized. “There are crates of produce stacked outside the market. We can slip a few dollar bills through the moneybox.”
“Sounds like…something that would never fly where I’m from, but that’s perfect,” Burke said. “So it’s on.”
Why did she like hearing him say that so much? “Okay,” she said. “But what about the Pie Prince contest? If I win princess, they’ll have me dance the first dance with the prince.”
“You didn’t tell me there was a contest for guys. If that’s the case, I’ll do what it takes to win.”
An untamed thrill shot through her chest. “Just like that?”
He nodded. “I’m not going to let one of these local goons twirl my fiancée around the dance floor. What do I have to do?”
“Eat a pie with your hands behind your back. Faster than the other guys.”
“Done.”
Another warm thrill sank deep into her chest. She smiled before realizing something—he probably wouldn’t be in town for the dance.
“Actually,” she said, “maybe we shouldn’t go after the titles after all.”
He tipped his head. “Why not?”
“Because the dance happens the day after Thanksgiving at the tree lighting ceremony.”
“The tree lighting ceremony?” His brow furrowed. “Man, they really keep you busy, don’t they?”
She chuckled, then sighed, hating the idea of Burke not being around for that. “It’s okay,” she said. “What you’re doing…what you’ve done, it’s already so generous. I don’t want to keep you up all night and force you to scarf down pie and worry about…”
She stopped there when she realized his eye had wandered. Justine studied him as his gaze followed something through the window.
At once he set his eyes back on her. He searched her face for the slightest moment, and then moved in as if he were about to kiss her.
“Hold still,” he urged under his breath. He moved in closer then, gliding his cheek ever so gently, teasingly, against hers. “I don’t mind coming back for the tree-lighting,” he said under his breath.
Goosebumps rippled up her arms as his facial scruff tickled her skin. He settled very close to her ear where his hot breath caused yet another round of goosebumps to surface.
She froze in place, unwilling to disrupt as he pressed a soft, heated kiss just above her jaw. His lips trailed over her skin, his breath teasing along the way, until he was at her earlobe again.
A deep wave of bliss rushed through her, settling low in her tummy.
“They’re watching us,” he rasped in a whisper.
She managed something she hoped he’d take as a nod, though she barely dared move for fear it would stop him. In truth, she did not want the moment, so very much like the one from her dream, to end.
At that thought, he came in once more, pressing the slightest kiss on her earlobe before circling the tiny diamond stud with his teasing lips.
Justine fisted the blanket in her lap as more goosebumps came.
“Sorry,” he said, the word barely audible as he kissed her cheek once more. He pulled back then, slid a finger along her jaw, and fixed those blue eyes on her. He looked so…calm compared to her.
Justine forced her fist to soften. She smoothed out the blanket beneath her hand as she worked to form an intelligible word.
“The game is afoot, princess,” he said with a wink. He grinned triumphantly. “I’ll get your door.” And then he was pushing his own door open and climbing out.
A jagged breath passed through her lips as he circled the car. The game was afoot, was it? It seemed so. It also appeared that Burke was a seasoned all-star while she was a mere novice.
Tonight’s event would be different from a quiet, meet-the-parent type of situation they’d had with Gramps. They were supposed to be an engaged couple. At least Burke seemed to know what he was doing. Thank heavens.
Now it was her job to keep up.

Get The Billionaire's (Not So) Fake Engagement here.
Posted by Kimberly Krey at 9:55 AM